Landscape and Rock–4 favorite photos from 2015

Landscape and bedrock… seems we seldom connect the two. We all like beautiful landscapes, but most of us don’t ask how they formed –and even fewer of us think about the story told by the rocks that lie beneath it all. Those make two time scales, the faster one of landscape evolution and the much slower one of the rock record. Considering that we live in our present-day human time scale, it’s no wonder there’s a disconnect!

Take this photo of Mt. Shuksan in northern Washington. My daughter Meg and I drove up to the parking lot at Heather Meadows and went for a quick hike to stretch our legs and take some pictures just before sunset.We had about a half hour before the light faded –and all I could think about was taking a photo of this amazing mountain. But the geology? What??

Thankfully, I’d been there in September scoping out a possible field project with a new grad student, and had the time to reflect… on time. From the ridge we hiked, shown as the dark area in the lower left corner of the left-hand photo below, we could almost feel Shuksan’s glaciers sculpting the mountain into its present shape. Certainly, that process is imperceptibly slow by human standards.

Mt. Shuksan: its glaciated NW side, summit, and outcrop of the Bell Pass Melange.

But the glaciers are sculpting bedrock –and that bedrock reveals its own story, grounded in a much longer time scale.

It turns out that the rock of Mt. Shuksan formed over tens of millions of years on three separate fragments of Earth’s lithosphere, called terranes. These terranes came together along faults that were then accreted to North America sometime during the Cretaceous. At the top of the peak you can find rock of the Easton Terrane. The Easton Terrane contains blueschist, a metamorphic rock that forms under conditions of high pressures and relatively low temperatures, such as deep in a subduction zone. Below that lies the Bell Pass Melange (right photo) –unmetamorphosed rock that is wonderfully messed up. And below that lies volcanic and sedimentary rock of the Chilliwack Group.

Here’s another of my favorites from 2015: the Keystone Thrust! It’s an easy picture to take –you just need to fly into the Las Vegas airport from the north or south, and you fly right over it. It’s the contact between the gray ledgey (ledgy? ledgeee?) rock on the left and the tan cliffs that go up the middle of the photo. 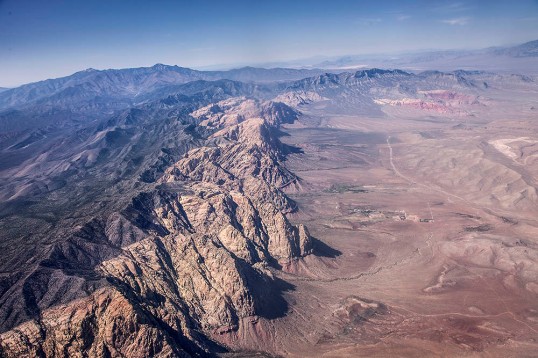 The gray rock is part of the Cambrian Bonanza King Formation, which is mostly limestone, and the tan cliffs consist of  Jurassic Aztec Sandstone. Cambrian, being the time period from about 540-485 million years, is a lot older than the Jurassic, which spanned the time 200-145 million years ago. Older rock over younger rock like that requires a thrust fault.

Talk about geologic history… the thrust fault formed during a period of mountain building during the Cretaceous Period, some 100-70 million years ago, long before the present mountains. And the rocks? The limestone formed in a shallow marine environment and the sandstone in a sand “sea” of the same scale as today’s Sahara Desert. We know it was that large because the Aztec Sandstone is the same rock as the Navajo Sandstone in Zion and Arches national parks.

So… the photo shows cliffs and ledges made of rocks that tell a story of different landscapes that spans 100s of millions of years. But today’s cliffs and ledges are young, having formed by erosion of the much older rock.  Then I flew over it in about 30 seconds.

At Beach 2 near Shi Shi Beach in Washington State are some incredible sea stacks, left standing (temporarily) as the sea erodes the headlands. The sea stack and arch in the photo below illustrates the continuous nature of this erosion. Once the arch fails, the seaward side of the headland will be isolated as another sea stack, larger, but really no different than the sea stack to its left. And so it goes.

And of course, the headland’s made of rock that tells its own story –of  deposition offshore and getting scrunched up while getting added to the edge of the continent.

Bedrock at Beach 2 consists mostly of sandstone and breccia. The white fragment is limestone mixed with sandstone fragments.

And finally, my last “favorite”. It’s of an unnamed glacial valley in SE Alaska. My daughter and I flew by it in a small plane en route to Haines, Alaska to visit my cousin and his wife. More amazing landscape–carved by glaciers a long time ago. But as you can expect, the rock that makes it up is even older and tells it’s own story.

Of course, this message of three time scales, the human, the landscape, and the rock-record time scale applies everywhere we go. Ironically, we’re usually in a hurry. I wish I kept it in mind more often, as it might slow me down a little.

To see or download these four images at higher resolutions, please visit my webpage: favorite 10 geology photos of 2015.

3 thoughts on “Landscape and Rock–4 favorite photos from 2015”