Cove Palisades, Oregon: a tidy short story in the vastness of time

If I were a water skier, I’d go to Lake Billy Chinook at Cove Palisades where I could ski and see amazing geology at the same time. On the other hand, I’d probably keep crashing because the geology is so dramatic! Maybe a canoe would be better.

The lake itself fills canyons of the Crooked, Deschutes and Metolius Rivers. It backs up behind Round Butte Dam, which blocks the river channel just down from where the rivers merge. The rocks here tell a story of earlier river canyons that occupied the same places as today’s Crooked and Deschutes Rivers. These older canyons were filled by basaltic lava flows that now line some of the walls of today’s canyons. 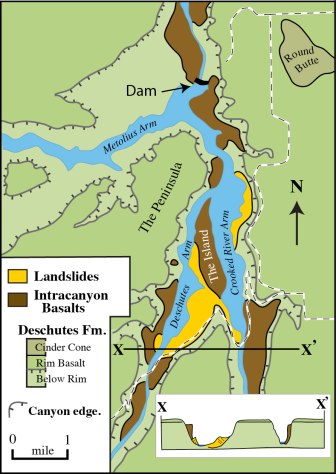 From the geologic map, modified from Bishop and Smith, 1990, you can see how the brown-colored canyon-filling basalt, (called the “Intracanyon Basalt”) forms narrow outcrops within today’s Crooked and Deschutes canyon areas. It erupted about 1.2 million years ago and flowed from a vent about 60 miles to the south. You can also see that most of the bedrock (in shades of green) consists of the Deschutes Formation, and that there are a lot of landslides along the canyon sides.

The cross-section at the bottom of the map shows the view along a west-to-east line. Multiple flows of the intracanyon basalt filled the canyon 1.2 million years ago –and since then the river has re-established its channel pretty much in the old canyon. While the map and cross-section views suggest the flows moved down narrow valleys or canyons, you can actually see the canyon edges, several of which are visible right from the road.

Probably the best place to see a canyon edge is where you enter the park from the east and start down the grade into the Crooked River Canyon. That area’s shown in the white box in the cut-out of the lead photo (below).

There, you can see canyon-filling basalt flows cutting down through the bedding in the older rock. Their contact marks the walls of the old canyon. In my opinion, the best place to photograph this spot is from the road directly below—at the little star on the lead photo. There’s even a waterfall!

View upwards to preserved canyon edge, where the intracanyon basalt cuts down through the Deschutes Fm. Location marked by star in previous photo.

Intracanyon basalt on skyline cutting down through older Deschutes Fm.

The Deschutes Formation. The rock of the original canyons, shown as the well-bedded material in the photos above, belongs to the Deschutes Formation. It formed as deposits from the early High Cascade volcanoes between 7.5 – 4 million years ago. Altogether, the formation exceeds 2000 feet in thickness. At Cove Palisades, the Deschutes Formation beautifully displays nearly its whole range of features, including braided channels, ash fall deposits, sandy debris flows, welded ash flow tuffs, and basaltic lava flows. It even hosts a small shield volcano, shown on the map as Round Mountain. Most of these features appear in the quarter-mile continuous exposure along the grade into the Crooked River Canyon –located by the pink-colored box on the photo above. 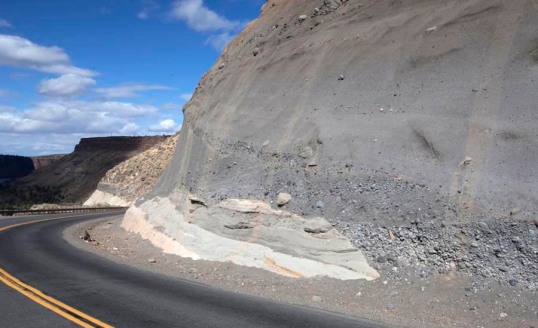 Deschutes Fm. as exposed near upper end of roadcut along eastern grade into canyon

Here’s one part of that roadcut—across from the large pullout near the top of the grade. You can see cross-bedded gravel filling scours and channels in underlying volcanic-rich sandstone and tuff. In the background, the shaded cliff and flat area is made of a basalt flow. It forms the rimrock of the Crooked River Canyon. The next photo shows this basalt, with some wonderful colonnade, at the very top of the grade.

Colonnade in basalt of Deschutes Fm. The roadway makes the gray band at the bottom.

Then there’s “The Ship” –a beautifully exposed outcrop of ash flow tuff called the “Cove Ignimbrite”. This tuff, which is also exposed along the long roadcut, points to a period of unusually explosive volcanic activity in the early High Cascades. It turns out there are 13 other ash flow tuffs preserved in the Deschutes Formation. They’re described by Pitcher and others (2017) who found that they all erupted between about 6.25 and 4.45 million years ago.

Cove Ignimbrite at “The Ship”

And Geologic Time  We see evidence of early canyons, carved into the Deschutes Formation by weathering and erosion. Later, these canyons filled with basaltic lava flows that erupted some 60 miles to the south near today’s Newberry Volcano. Weathering and erosion continued its work and carved the canyons again. But that’s not all. Landslides speak to weathering and erosion that continues today in the canyon. The Deschutes Formation, which formed the original canyon walls, is much older than all of this –it’s made of more than 2000 feet of material from volcanoes that no longer exist! Among other things, it tells us of an especially explosive period in the history of these former volcanoes. All within 7.5 million years.

Most geologists (me included) tend to think of 7.5 million years as a pretty short time. After all, the Cenozoic Era started about 66 million years ago –and before that was another 4,484 million years of Earth history. When you dig into the details though, you come to appreciate just how long that 7.5 million years really is –and then the vastness of geologic time becomes almost overwhelming.

You can view and download any of these images–and others from Cove Palisades– at a resolution that works for power point by typing “Cove Palisades” into the keyword search at geologypics.com.

6 thoughts on “Cove Palisades, Oregon: a tidy short story in the vastness of time”