I always try for window seats when flying and I always try to shoot photos out the window –with varying results! So often, the window’s badly scratched, there are clouds, it’s hazy, the sun angle’s wrong –there are myriad factors that can make good photography almost impossible from a commercial jet. Last year though, I had a few amazing flights with clear skies and a great window seat –and I’ve now loaded nearly 100 images onto my website for free download. Here are 10 of my favorites, in no particular order. You can click on them to see them at a larger size. They’re even bigger on my website.

Mt. Shasta at sunset. Volumetrically, the biggest of the Cascade Volcanoes, Mt. Shasta last erupted between 2-300 years ago –and it’s spawned over 70 mudflows in the past 1000 years. From the photo, you can see how the volcano’s actually a combination of at least 3 volcanoes, including Shastina, which erupted about 11,000 years ago.

If you want to see more aerials of Mt. Shasta (shot during the day) –and from a small plane, go to the search page on my website and type in “Shasta”.

Meteor Crater, Arizona.  Wow –I’ve ALWAYS wanted to get a photo of Meteor Crater from the air –and suddenly, on a flight from Phoenix to Denver, there it was!

Meteor Crater, also called Barringer Crater, formed by the impact of a meteorite some 50,000 years ago. It measures 3900 feet in diameter and about 560 feet deep. The meteorite, called the Canyon Diablo Meteorite, was about 50 meters across.

Dakota Hogback and Colorado Front Range, near Morrison, Colorado. Same flight as Meteor Crater –and another photo I’d longed to take. It really isn’t the prettiest photo, BUT, it shows the Cretaceous Dakota Hogback angling from the bottom left of the photo northwards along the range and Red Rocks Amphitheater in the center –then everything behind Red Rocks, including the peaks of Rocky Mountain National Park in the background, consist of Proterozoic basement rock. 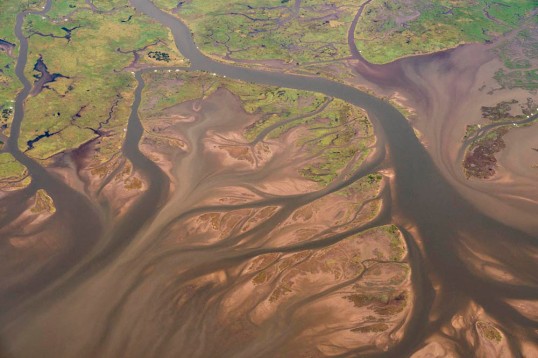 Meander bends on the Mississippi River. My mother lives in Florida, so I always fly over the Mississippi River when I go visit –but I was never able to take a decent photo until my return trip last October, when the air was clear, and our flight path passed just north of New Orleans. Those sweeping arms of each meander are about 5 miles long! 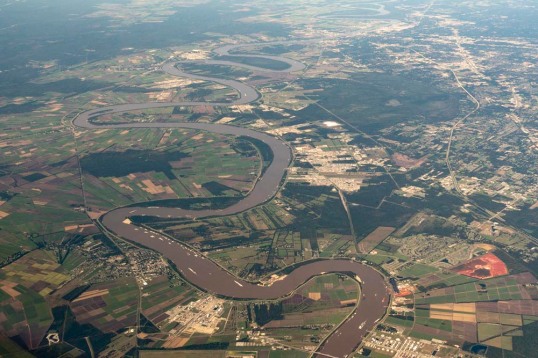 Salt Evaporators, San Francisco Bay. Flying into San Francisco is always great because you get to see the incredible evaporation ponds near the south end of the bay. I always love the colors, caused by differing concentrations of algae –which respond to differences in salinity. And for some reason, salt deposits always spark my imagination. Salt covers the floor of Death Valley, a place where I do most of my research, and Permian salt deposits play a big role in the geology of much of southeastern Utah, another place I know and love. 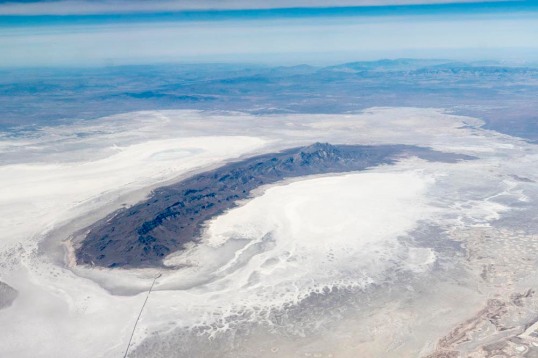 San Andreas fault zone and San Francisco. See those skinny lakes running diagonally through the center of the photo? They’re the Upper and Lower Crystal Springs Reservoirs –and they’re right on the San Andreas Fault. And you can see just how close San Francisco is to the fault.  As the boundary between the Pacific and North American Plates, its total displacement is about 200 miles. See this previous post for more photos of the San Andreas fault.

And my favorite: Aerial view of the Green River flowing through the Split Mountain Anticline –at Dinosaur National Monument, Utah-Colorado. Another photo I’ve so longed to shoot –but didn’t have the opportunity until last year.

The Green River cuts right across the anticline rather than flowing around it. It’s either an antecedent river, which cut down across the fold as it grew –or a superposed one, having established its channel in younger, more homogeneous rock before cutting down into the harder, folded rock. You can also see how the anticline plunges westward (left) because that’s the direction of its “nose” –or the direction the fold limbs come together. The quarry, for Dinosaur National Monument, which you can visit and see dinosaur bones in the original Jurassic bedrock, is in the hills at the far lower left corner of the photo.

So these are my ten favorites from 2019. Thanks for looking! There are 88 more on my website, at slightly higher resolutions and for free download. They include aerials of the Sierra Nevada and Owens Valley, the Colorado Rockies, including the San Juan Volcanic Field, incised rivers on the Colorado Plateau, and even the Book Cliffs in eastern Colorado. Just go to my geology photo website, and in the search function type “aerial, 2019” –and 98 photos will pop up. Boom!