In January, I started teaching the Introductory Geology course “Environmental Geology and Landform Development” –with two lecture sections of about 200 students each. And this course, populated largely by folks who are fulfilling a science requirement and  otherwise try to avoid science like it was the plague, needed some general statement about science. After all, it’s science that may someday save them from the plague!

So science… what is it? Seems like scientists themselves have a zillion different definitions, so I started with “Scientist. –What’s a scientist?” If you google “scientist” and then look at the images, you see this. As this image is a screenshot of photos that aren’t mine, I intentionally blurred it, but you should get the idea of what’s there. 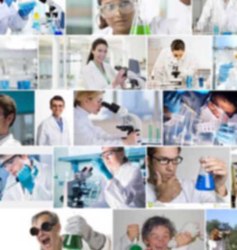 Really??? these are the most popular images of scientists and in every picture–save the tiny one in the lower right– is some person in a WHITE LAB COAT and a microscope or a beaker. Ironically, it shows about 50% of the scientists as women. Go figure there too.

Looks like we’ve been fed a misrepresentation of what scientists are. We actually do a wide variety of things. In geology, we do a wide wide range of things. We spend time in the field (see picture below), we write, we draw maps and cross-sections, we look down microscopes (maybe in jeans and t-shirts), we write computer models, we do experiments, and we sometimes wear white lab coats.

All the time, we’re trying to understand something about our world. Our universe. We’re collecting information (data). We’re testing ideas. We’re adding detail to somebody else’s ideas. We’re building a framework of knowledge that’s grounded in our observations and testable ideas. Replace the word “ideas” with “hypotheses” in this paragraph –and you get science.

Ideally, most scientists approach their work using the “scientific method” –which is a highfalutin way of saying they see something they don’t understand (an observation), which causes them to ask a question (like how did this happen?); they come up with ideas (hypotheses) that may explain it, and then they test those hypotheses.

Which is what we did in class with icicles! The month before–in mid-December–Eugene had this incredible ice storm, which covered everything in ice to make it look like a scene from the movie Frozen. It was beautiful and destructive. And we can all pretty much guess how icicles form: water starts to drip off the branch but freezes before it falls off. Icicles grow straight downward off the branch because water, like everything else, falls vertically with gravity.

As it turned out, some of the icicles seemed to grow straight out from the branches. Look at the photo below! How could this be? We know icicles should grow straight downwards! So as a group, we came up with some hypotheses, shown below next to the picture. I was the proud sponsor of hypothesis #4 and #5. 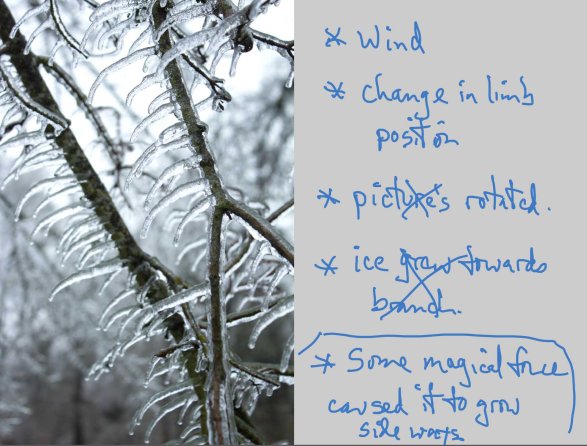 Alternate hypotheses to explain near horizontal growth of icicles

As a group (all 200 of us), we could rule out hypothesis #3, that the picture was rotated. I shot the image and promised I didn’t rotate it! We could also rule out hypothesis #4, that the ice somehow grew horizontally towards the branch, because that idea conflicted with all previous observations we’d made on icicles, that they grow away from the branch as ice progressively freezes.

That left hypotheses #1, #2, #5. We figured ways we could test #1, #2. If it were the wind, for example, we’d expect all the icicles to go in one direction in a given place, regardless of the limb angle. If it were #2, we might expect to see some icicles show a curve to indicate progressive tilting of the branch–which you can actually see in the photo above!

Hypothesis #5, that “Some magical force caused it to grow sideways”isn’t testable. It’s NOT TESTABLE. We can’t come up with ways to support it or rule it out. You can believe it if you want to, but it’s not science.

That’s the point. To be scientific, a hypothesis must be testable. Most of us hold various non-scientific beliefs in our hearts that we know to be true –for us. I think that’s a good thing. For many of us, those beliefs lend us qualities like strength or courage or compassion when we need them the most. They’re still not scientific.

And the Republicans? They’re now all about “alternative facts”. Maybe it’s unfair to group “all Republicans” together –but I see very few standing up to this reckless leader we have. Maybe they just lack integrity.

this photo was rotated