You could teach a geology course at Devil’s Punchbowl, a state park just north of Newport, Oregon. Along this half-mile stretch of beach and rocky tidepools, you see tilted sedimentary rocks, normal faults, an angular unconformity beneath an uplifted marine terrace, invasive lava flows, and of course amazing erosional features typical of Oregon’s spectacular coastline. And every one of these features tells a story. You can click on any of the images below to see them at a larger size.

View southward from Cape Foulweather to the Devil’s Punchbowl. 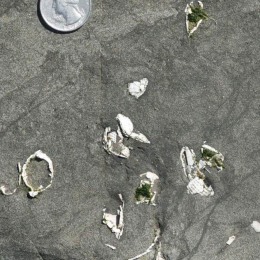 The rocks. They’re mostly shallow marine sandstones of the Astoria Formation, deposited in the early part of the Miocene, between about 16.5 to 22 million years ago. The rocks are tilted so you can walk horizontally into younger ones, which tend to be finer grained and more thinly bedded than the rocks below. This change in grain size suggests a gradual deepening of the water level through time. In many places, you can find small deposits of broken clam shells, likely stirred up and scattered during storms –and on the southern edge of the first headland north of the Punchbowl, you can find some spectacular soft-sediment deformation, probably brought on by submarine slumping. Later rock alteration from circulating hot groundwater caused iron sulfide minerals to crystallize within some of the sandstone. END_OF_DOCUMENT_TOKEN_TO_BE_REPLACED