Just scratching the surface. A geologic cross-section of Oregon speaks to unimaginable events.

The cross-section below runs from the Cascadia subduction zone across Oregon and into eastern Idaho.  It outlines Oregon’s geologic history, beginning with accretion of terranes, intrusion of granitic “stitching plutons”, and deposition of first North American-derived sedimentary rocks, and ending with High Cascades Volcanic activity and glaciation. 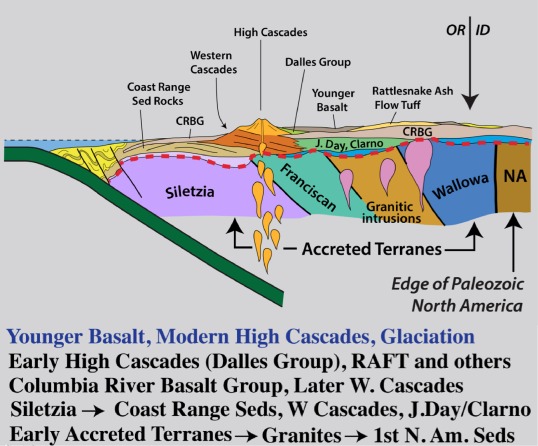 Schematic geologic cross-section across Oregon, from the Cascadia Subduction zone into western Idaho.

The cross-section barely scratches the surface of things. Moreover, it boils everything down to a list, which is kind of sterile. But the cross-section also provides a platform for your imagination because each one of these events really happened and reflects an entirely different set of landscapes than what we see today.

Think of the CRBG about 15 million years ago. The basalt flows completely covered the landscape of northern Oregon and southern Washington. Or the Clarno volcanoes –only a part of the green layer called “Clarno/John Day”. They were stratovolcanoes in central Oregon –when the climate was tropical! Or try to wrap your mind around the accreted terranes, some of which, like the Wallowa Terrane, contain fossils from the western Pacific.

To emphasize this point, here’s Crater Lake. Crater Lake formed because Mt. Mazama, one of the Cascades’ stratovolcanoes, erupted about 7700 years ago in an eruption so large and violent that it collapsed in on itself to form a caldera. It’s now a national park, with a whole landscape of its own. And if you visit Crater Lake, you’ll see evidence that Mt. Mazama had its own history –which dates back more than 400,000 years. But Crater Lake and Mt. Mazama make up just a tiny part of the Cascades, which are represented on this diagram by just this tiny area that’s shaped like a mountain.

Crater Lake occupies the caldera of Mt. Mazama, which erupted catastrophically some 7700 years ago.

So the cross-section is kind of sterile and just scratches the surface. But what makes geology so incredible is that we’re always learning new things and digging deeper –and we know we’re just scratching the surface –that there will always —always— be something  to learn.

click here and type “Oregon” into the search for photos of Oregon Geology.
click here for information about the new Roadside Geology of Oregon book.