Crater Lake never ceases to amaze me.  It’s huge –some 6 miles (10 km) across, deep –some 1700 feet deep in parts –the deepest lake in the United States and 7th deepest on the planet– incredibly clear, and really really blue.  And for volcano buffs, one of the best places ever!

Crater Lake as seen from The Watchman. Wizard Island, which formed after the caldera collapse, occupies the center of the photo.

Crater Lake is a caldera, formed when ancient Mt. Mazama erupted so catastrophically that it emptied its magma chamber sufficiently for the overlying part of the mountain to collapse downward into the empty space.  That was about 7700 years ago.  Soon afterwards, Wizard Island formed, along with some other volcanic features that are now hidden beneath the lake–and then over the years, the lake filled to its present depth.  It’s unlikely to rise any higher because there is a permeable zone of rock at lake level that acts as a drain.

Here’s one of the coolest things about the cataclysmic eruption: Not only was it really big, but it happened really fast.  We know it was big because we can see pumice, exploded out of the volcano, blanketing the landscape for 100s of square miles to the north of the volcano –and we can see the caldera.  We can tell it happened quickly because the base of the pumice is welded onto a rhyolite flow that erupted at the beginning stages of the collapse; the rhyolite was still HOT when the pumice landed on it!  You can see the welded pumice on top the Cleetwood Flow along the road at Cleetwood Cove.

pumice welded onto top of Cleetwood rhyolite flow at Cleetwood Cove. Note how the base of the pumice is red from oxidation –and forms a ledge because it’s so hard.  Pumice blankets the landscape all around Crater Lake.

Crater Lake though, is so much more than a caldera –it’s the exposed inside of a big stratovolcano!  Where else can you see, exposed in beautiful natural cross-sections, lava flow after lava flow, each of which erupted long before the caldera collapse and built the original volcano? Within the caldera itself, these flows go back 400,000 years–the oldest ones being those that make up Phantom Ship –the cool little island (some 50′ tall) in Crater Lake’s southeast corner. 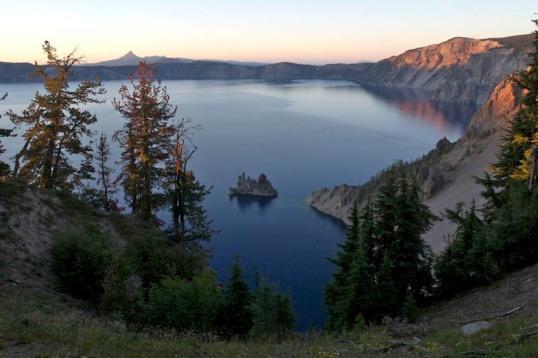 Phantom Ship, in Crater Lake’s southeast corner, is made of the caldera’s oldest known rock, at 400,000 years old.

Click here if you want to see a Geologic map of Crater Lake.
Or… for more pictures of Crater Lake, type its name into the Geology Search Engine.  Or… check out the new Roadside Geology of Oregon book!