Archive for the tag “erosion”

All told, we humans have discovered more than 5000 mineral types. I challenged myself to list the five most important minerals when it comes to the formation of rocks and their subsequent weathering and erosion into landscape.

It’s an impossible task –and subjective, of course –and I fudged a bit by grouping some minerals together. But here they are: the silicate minerals quartz, mica, feldspar, and mafic minerals, and the carbonate mineral, calcite. I invite you to take me to task in the comments section. Even so, these five minerals are easy to identify and are critical to any discussion about rocks –which makes them important to understanding weathering and erosion. And, I’m adding them to my already packed curriculum for my introductory class on surface processes next term, so five seems to be a good upper limit on the numbers.

Oh! Click on any image to see it enlarged on a separate page.

Weathering, by the way, is the in-place physical and/or chemical breakdown of rock; erosion is its removal –so they go hand-in-hand. A lot goes into how susceptible a rock is to these processes—not just the mineral content—and when it comes to chemical breakdown, the main factors always involve water. If a rock is accessible to water, it will break down more quickly; if it’s not accessible to water, it will be more resistant.

Because some rocks will weather and erode more quickly than others, landscapes form with cliffs and valleys and steep slopes, gentle slopes –all sorts of variation you can imagine—depending in part on the bedrock. We call the phenomenon “differential erosion”. You can find more detail on the processes in one of my earlier posts, called “Shaping of Landscape“.

Quartz  –most people have come to know quartz because of its pretty crystals –especially the purple variety called amethyst—but they might not realize that it’s a hugely important component of many igneous, metamorphic, and sedimentary rocks, and it forms the cement of many sedimentary rocks.  When it comes to weathering, quartz is practically inert chemically, so a strongly quartz-cemented sandstone will be more resistant to weathering and erosion than most other sedimentary rocks. The sandstone will stand out in relief, likely as cliffs or even overhangs. By contrast, weakly cemented, often finer-grained rocks tend to form slopes or even valleys.

If you look closely at a sandstone like the one below, chance are you’ll see mostly quartz grains. Quartz grains might break up into little pieces as they’re being transported by rivers, for example, but they won’t turn into clay like most other minerals. The result? Sediment gets increasingly rich in quartz the farther it’s transported from its source –and so if it travels a great distance, quartz is just about the only thing left!

And if you’re one of those people who really love this mineral, check out this post by Roseanne Chambers, which is all about quartz!

Micas are those shiny sheet-like minerals we see catching the light in a whole host of rocks. The best known micas are muscovite (white mica) and biotite (black mica). In metamorphism, they grow larger with increases in temperature, providing a handy way to distinguish between slate, phyllite, and schist — a nice thing to know in a geology class. The diagram below illustrates the process.

When it comes to weathering and erosion, those little mica sheets allow infiltration of water. Metamorphic rocks overall are pretty resistant because of their crystallinity –but slates or schist, for example, degrade much more quickly than gneisses because of their prevalence of mica minerals, which together create a fine-scale layering in the rock. Gneisses are coarse-grained, and their layering tends to be thicker and less permeable.

Collectively, feldspars are the most common minerals of the Earth’s crust –and there are numerous varieties, the most common being orthoclase and plagioclase, which often occur together. For the purposes of landscapes, I grouped them together as one: they’re all kind of chunky looking and are generally light-colored. Feldspars are the main components of igneous rocks, making up 60-70% (or even more) of most granitic rocks, which tend to form distinctive landscapes marked by cliffs and large rounded boulders.

The “mafic minerals” are named so because they’re generally rich in iron and magnesium and poor in silica when compared to a lot of other common minerals –and they’re typically dark green to black in color, so “mafic rocks” like basaltic lavas also tend to be darker colored. The main mafic minerals are olivine, pyroxene, and amphibole. Olivine, as it turns out, is our planet’s most common mineral! It’s the main stuff of the mantle, which depending on where you are, lies some 10-40km below the surface.

Finally, calcite, the sole non-silicate on this list, is hugely important because it’s what makes up the very common sedimentary rock limestone. Limestones occupy a separate class of sedimentary rock than sandstones: they’re “biogenic”, having formed through the precipitation of calcite through biological processes, as opposed to “clastic”, which are just broken particles. As a result, they’re important to understanding sedimentary rocks, and because of the biology connection, Earth history and evolution. For landscapes, limestones are also really important because the calcite will dissolve in slightly acidic water to form caves and sinkholes–there’s a whole class of landscape called “Karst”, which results from the dissolution of limestone.

And re-precipitation of calcite within caves forms the beautiful speleothems we so love –stalactites, stalagmites, flowstone… the list goes on. That rock, called travertine, occupies a third class of sedimentary rock called “chemical sedimentary rocks”.

Phew! My apologies to those mineralogy people who might read this and think, “but she missed that important idea! And that one too! And what about that mineral?” Maybe that’s the point though –this is just a start. There is so much these five minerals can teach us –and there are so many other wonderful minerals I didn’t even mention. So here’s to reading more info that somebody might’ve put into the comments section. Here also to all the geology majors out there who take upper level geology courses that delve into all the amazing detail and make connections that I wasn’t able to in this little space!

And if you want to download any of these photos for your own –just type in the photo id into the search function of my geology photo website.

Also, I posted a primer on rock types –if you’re interested, please have a look –and thanks for reading!

Shaping of Landscape: A primer on weathering and erosion

Most of us love landscapes –and many of us find ourselves wondering how they came to look the way they do. In most cases, landscapes take their shape through the combined processes of weathering and erosion. While weathering and erosion constitute entire fields of study unto themselves, this primer outlines some of the basics—which pretty much underlie all the further details of how natural processes shape landscapes.

Two definitions: weathering describes the in-place breakdown of rock material whereas erosion is the removal of that material. Basically, weathering turns solid rock into crud while erosion allows that crud to move away.

Spalling of volcanic rock–likely from thermal expansion during a fire.

END_OF_DOCUMENT_TOKEN_TO_BE_REPLACED

You can’t avoid thinking about erosion while standing on one of Oregon’s rocky headlands. The waves keep coming, one after another, each crashing repeatedly against the same rock. Impossibly, the rock appears unmoved and unchanged. How can it not erode?

The answer, of course, is that headlands do erode, quickly, but on a geologic time scale. We just miss out because we live on the much shorter human time scale. And the erosion belongs to a cycle in which coastal uplift causes eroded and flattened headlands to rise and become headlands once again, all subject to more ongoing erosion and uplift.

Wave energy is most intense at headlands because the incoming wave typically feels the ocean bottom near the headland first, which causes the wave to refract. As shown in the aerial photo below, this refraction focuses the wave energy on the headland.

Wave refraction causes wave energy to focus on the headland. Arrows are perpendicular to wave fronts.

As you can see in the next few images, headlands don’t erode evenly. They erode irregularly, as the waves exploit any kind of weakness in the rocks such as faults and fractures, or if they’re sedimentary, bedding surfaces. The products of this erosion are as beautiful as they are interesting: sea stacks, sea arches, sea caves… The list goes on and on.

From the above photo, you can see that sea stacks are simply the leftover remains of a headland as it retreats from erosion. That’s a critical point, because some sea stacks, especially the one with the arch in the photo below, are a long way from today’s coastline. 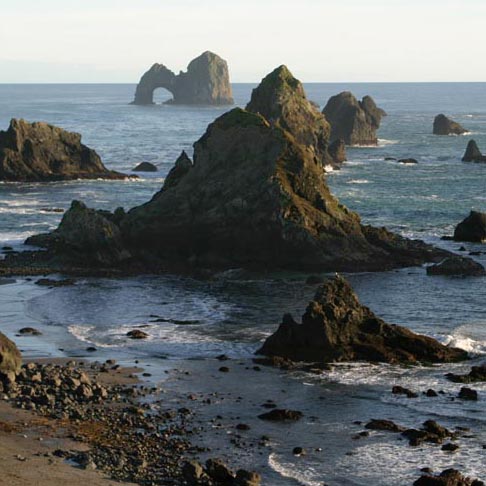 Those rocks, 1/4 to a 1/2 mile away used to be a part of the coastline? The land used to be way out there? YES!!! For me, that’s one of the very coolest things about sea stacks –they so demonstrate the constant change taking place through erosion.

Taken to its extreme, erosion renders headlands into wave-cut platforms, such as the one below at Sunset Bay. Being in the intertidal zone, these platforms make great places for tide-pooling–and ironically, for people-watching too. Geologically, they form important markers because they’re both flat and form at sea level. When found at higher elevations, they indicate uplift.

In fact, looking carefully at the photo above, you can see a flat surface on the other side of the bay. It’s an uplifted wave-cut platform! Called a marine terrace, it’s covered by gravel and sand originally deposited in the intertidal zone. Those deposits rest on bedrock that, at an earlier time, was also flattened by the waves. The photo below shows a better view of this terrace from the other side.

These uplifted marine terraces can be found up and down Oregon’s coastline. Researchers recognize several different levels, the oldest being those uplifted to highest elevations. The one in the photo above at Shore Acres State Park is called the Whiskey Run Terrace and formed about 80,000 years ago. You can see a similar-aged terrace below as the flat surface beneath the lighthouse at Cape Blanco, Oregon’s westernmost point. An older, higher terrace forms the grass-covered flat area on the right side of the photo.

Cape Blanco, Oregon looking NE. The flat surface beneath the lighthouse is the ~80,000 year-old Cape Blanco Terrace, probably equivalent to the Whiskey Run Terrace at Shore Acres; the flat area on the right side of the photo is the higher Pioneer Terrace,  formed ~105,000 years ago.

Researchers take the approximate ages of the terraces and their elevations to calculate approximate rates of uplift. In this area, Kelsey (1990) estimated a rate of between 4-12 inches of uplift every 1000 years. That might seem slow, but over hundreds of thousands of years, it can accomplish a great deal.

And look! The uplifted terraces? They’re on headlands! Of course, because they’ve been uplifted! And the headlands are now eroding into sea stacks and then platforms –to be uplifted in the future and preserved as marine terraces that sit on top headlands. And on and on, as long as the coastline continues rising.

Blowhole near Yachats, Oregon. Incoming wave funnels up a channel eroded along a fracture and explodes upwards on reaching the end.

Earth Science Photographs–free downloads for Instructors or anybody: my webpage!