Geologic Time in a mountainside –the Wallowa Mountains from Joseph, Oregon

Joseph, Oregon is a wonderful place for geology.  The town sits right at the foot of the Wallowa Mountains in the northeastern corner of Oregon.  The mountains rise some 4-5000′ abruptly from the valley floor along a recently active normal fault. 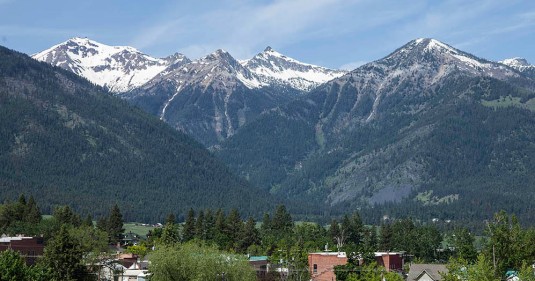 The Wallowa Mountains rise along a fault zone just south of the town of Joseph.

In the mountains, you can see some bedrock relations that speak to great lengths of geologic time.  An erosional remnant of the Columbia River Basalt Group caps Sawtooth Peak in the photos below; it sits directly on granite of the Wallowa Batholith –and just a little bit south, on the next peak, the granite intrudes Martin Bridge Limestone!  So, from oldest to youngest, the rock units are the Martin Bridge Limestone, the Wallowa granite, the Columbia River Basalt.

Sawtooth Peak (right) capped by Columbia River Basalt. Beneath it is granite of the Wallowa Batholith –and off to the left, are the bedded rocks of the Martin Bridge Limestone.  See below for labels. 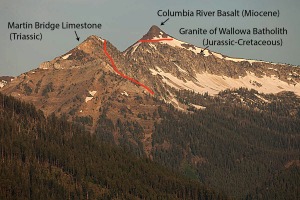 Rock units and contacts described in the text

Never mind that we know the Martin Bridge Limestone is Triassic –so more than 200 million years old –and that the Wallowa Batholith formed at different times between 140 to about 120 million years ago –and that the basalt is about 16 million years old.  You can throw out radiometric dating, but even so, you’re looking at a great span of geologic time.  The limestone first had to be deposited, layer after layer –and then buried –and then intruded at a depth of 5-8 km by the granite –which THEN had to get uplifted to Earth’s surface so the basalt could flow over it.  After THAT, it all had to get uplifted to its present elevation along the normal fault just south of town and much of the basalt had to erode away.

Honestly, we have influential people in this country who spout off things like the Earth is only 6000 years old.  They also deny the overwhelming evidence for climate change.  I guess I should stop writing now before I get too worked up!

More photos of the Wallowas at Geologic Photography.

One thought on “Geologic Time in a mountainside –the Wallowa Mountains from Joseph, Oregon”