Archive for the tag “structural geology”

Where can you see some rocks? It’s winter and everything’s covered in snow –or you’re visiting family in some place where there’s virtually no bedrock exposed anywhere –or you’re simply stranded far from any good rocks in the center of a big city.

Take yourself on a field trip to a granite countertop store! You might not see very much real granite, but you will see some other types: folded gneiss, pegmatite, amphibolite, quartzite, maybe even some granite… and a lot of amazing metamorphic and igneous features and faults –and they’re all polished and none are covered by vegetation.

I needed a rock fix the other day while visiting my mother in SW Florida –so I drove to a granite countertop store. And wow— I saw all sorts of great stuff, a lot of which related to faulting and fracturing, and a lot of it could go right into a geology textbook. In Florida!

Red garnet along with quartz and feldspar in gneiss -a metamorphic rock.

END_OF_DOCUMENT_TOKEN_TO_BE_REPLACED

With a surface area of nearly 1000 square kilometers (381 square miles), the Salton Sea is California’s largest lake.  But it’s relatively shallow –and because it has no outlet, it’s saltier than ocean water.  It formed in 1905 when the nearby Colorado River overwhelmed irrigation canals and flooded the region.  Now it’s an incredibly important migratory bird refuge, fishery, and dumping ground for agricultural waste.  Seems like those things shouldn’t really go together!

But it just seems young.  The Salton Sea actually occupies part of the Colorado River Delta –and as a result, has been filled with freshwater multiple times since the delta was first constructed, probably near the beginning of the Pleistocene.  It’s also at the remarkably low elevation of 234 feet (71m) below sea level; the deepest part of the lake is 44 feet (13 m) below that.

And the low spot is there because of extension caused by the San Andreas fault system!  The San Andreas fault terminates along the eastern margin of the lake basin, but steps across the lake to the Imperial fault, which forms its western margin.  Both faults are right-lateral –and because they step to the right, they pull the area apart in-between them.  Kind of like central Death Valley –which is even lower in elevation than the Salton Sea!  But more on Death Valley later. 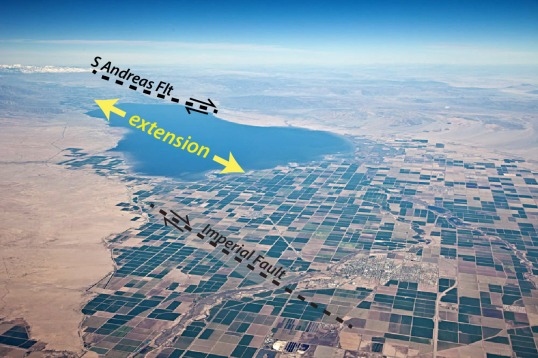 Aerial view of Salton Sea, with the approximate locations of the southern San Andreas and Imperial faults. Note how right-lateral slip on the two en-echelon faults drive extension between them.

Of the many geologic events that shaped the western United States since the beginning of the Paleozoic Era, five really stand out.  In approximate chronological order, these events include the accumulation of tens of thousands of feet of sedimentary rock on a passive margin, periods of compressional mountain building that folded and faulted those rocks during much of the Mesozoic–likely driven by the accretion of terranes, intrusion of subduction-related granitic rock (such as the Sierra Nevada) during the Jurassic and Cretaceous, volcanic activity during the late Cenozoic, and mountain-building by crustal extension during the late Cenozoic and continuing today.  This photo on the western edge of Panamint Valley in Death Valley National Park of California, captures all five.

View of canyon wall on west side of Panamint Valley in SE California –part of Death Valley National Park. See photo below for interpretation.

The photograph below shows an interpretation.  Paleozoic rock is folded because of the Late Paleozoic-early Mesozoic compressional mountain-building; it’s intruded by Jurassic age granitic rock, an early phase of Sierran magmatism that took place just to the west; the granitic rock is overlain by Late Cenozoic basalt flows, and everything is cut by a normal (extensional) fault.  And there is also a dike that cuts the Paleozoic rock –probably a feeder for the basalt flows.

So this is all nerdy geology cross-cutting relations talk –but here’s the point: in this one place, you can see evidence for 100s of millions of years of Earth History.  Earth is old old old!  THAT’S why I love geology!

click here to see photos and explanations of geologic contacts.
or click here for a slideshow of Death Valley geology.