Great Unconformity in Montana –and rising seas during the Cambrian

Here’s yet another picture of the Great Unconformity –this time in southwestern Montana.  Once again, Cambrian sandstone overlies Precambrian gneiss.  You can see a thin intrusive body, called a dike, cutting through the gneiss on the right side.  You can also see that the bottom of the sandstone is actually a conglomerate –made of quartzite cobbles derived from some nearby outcrops during the Cambrian.

And… just like in the Grand Canyon and elsewhere, there is Cambrian age shale and limestone above the sandstone.  This rock sequence reflects rising sea levels during the Cambrian.  It’s called the “Cambrian Transgression”, when the sea moved up onto the continent, eventually inundating almost everywhere.  If you look at the diagram below, you can see how this sequence formed. 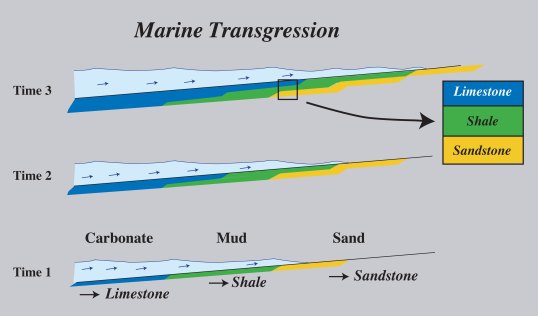 Sequence of rock types expected during a transgression of the sea onto a continent.

If you look at time 1, you can see a coastline in cross-section, with sand being deposited closest to shore, mud a little farther out, and eventually carbonate material even farther out.  As sea levels rise (time 2), the sites of deposition for these materials migrates landward, putting mud deposition on top the earlier sand deposition and so on.  At time 3, the sequence moves even farther landward, resulting in carbonate over mud over sand.  If these materials become preserved and turned into rock, they form the sequence sandstone overlain by shale overlain by limestone –just what we see on top the Great Unconformity.